Sri Lanka’s gemstone and jewelry industry blend traditional practices and experience with the needs of the modern global market. The island of Sri Lanka has a heritage of gem mining and trading that dates back to 2000 years.

Sri Lanka is a tropical island situated in the Indian Ocean, off the southern tip of India. Sri Lanka has earned its namesake as the ‘Gem Island’ or ‘Island of Gems’ (Ratna Dweepa), with its abundance of corundum gems, chrysoberyl and alexandrite, garnet, moonstone, peridot, spinel, topaz, tourmaline, and zircon.

During the 16th century, Portuguese explorer Vasco de Gama said of Sri Lanka: “Ceylon has all the fine cinnamon of the Indies and the best sapphires.”

Sri Lanka boasts a true mine-to-market industry, both domestically and for export. A fascinating aspect of this is the harmonious and productive blend of tradition, experience, and modernization.

Mining is done primarily by the use of traditional methods and is small-scale by choice and design as such mines are considered to be less harmful to the environment and a more stable source of employment for more people.

Pit, river, and mechanized are the three types of mining practiced in Sri Lanka. Manual labor is the primary method used in mining. The National Gem and Jewelry Authority is the regulatory body responsible for the issuance of mining licenses and ensures that all related processes are conducted according to the set standards and rules.

In Sri Lanka, gem-bearing gravels known as illam are some of the richest in the world. Blessed with geological conditions made up of the ideal blend of chemistry, heat, pressure, time and weathering, the island is a veritable nature-made gem laboratory.

Besides the well-known Pangaea, which existed about 300 million years ago, there were several other supercontinents in the Earth’s early history, their assembly and break up cycle helped form most of the world’s gem deposits. A number of these cycles are linked to the formation of gems in Sri Lanka. 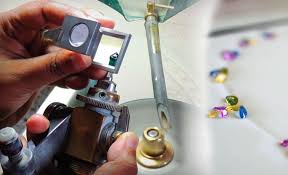 Gem cutting (lapidary) is another area in the trade where the traditional meets the modern in Sri Lanka. Centuries of experience in cutting and polishing continue alongside new technology and design models.

The time-honored art of reading rough and orienting stones is integrated with the growing demand of the global market for exact calibration, well-balanced proportions, and high quality polish.

Thus the Sri Lankan lapidary industry consists of a fascinating blend of high-powered techniques, utilizing some of the world’s greatest expertise in the orientation of rough, and a growing precision cutting and re-cutting sector that maintains the strictest of tolerances.