The hands and fingers seemed to work to an inner beat, to a pulse, only the drum-maker himself could hear. As wood was smoothed, leather cords tightened, and cowhide stretched, they would be periodically tested, plucked, tapped, thrummed by the fingers, searching for a quality defined by sound. Ironically, in the gloom of the small stall that doubled as a workshop, there was no music whatsoever; not even a transistor radio. The only sounds were those of the tools, the muted conversation, underlined by the tapping.

Nimal Wickramasiri is an artist. And his art is the beat. Nimal is not a musician, but the drums he makes are sought after by musicians all over Sri Lanka. Now middle-aged, Nimal has been making drums all his life. His father, awarded by three Presidents, had done the same, as had his grandfather, and for generations before, now lost in the rhythm of time. Nimal’s son, Kasun, is a skilled drum-maker in his own right. The beat in this family’s blood shows no sign of drying up.

Originally, the bodies of drums were made of a variety of forest trees, but increasing legislation against deforestation has forced drum-makers to restrict themselves to the more easily available coconut and jack wood. Raw logs are brought to a workshop at Nimal’s ancestral home, where the bodies of the drums are crafted by his son, Kasun. The basic shaping of each drum body must be just as perfect as any of the subsequent stages in the drum’s creation. A badly formed drum body cannot be saved further down the line.

Traditionally, logs were shaped on manual pulley-operated lathes, and then hollowed out with hammer and chisel, a process that could take over a day for a large drum like the double-tapered Geta Bera. Today, an electric lathe allows them to finish a drum body in a couple of hours. While many drum-makers today retain the skills needed to carve a drum body by hand, I was told that it is a skill no longer used.

Once the drum bodies are finished, smoothed, varnished and, in some cases, decoratively carved, Kasun transports them to the outskirts of Colombo, where his father will proceed with the next steps in the drum-making process. An accomplished drummer as well as drum-maker, Kasun is often called on by his father to try out drums that are made to order for special customers, and one of these occasionally accompanies him back to Alavala for tuning and adjustment.

As with the bodies, conservation laws no longer allow the use of many traditional materials, and goat- and cowhide has replaced it; the drum-makers cleverly using various thicknesses to mimic the distinct sounds of different wild animal skins.

Thin, sundried hides, are soaked in water to avoid tearing, and then stretched over the drum openings in varying layers to form the drumhead. Rawhide cords are laced through the drumhead, and fastened with rings and pegs that can be tightened and loosened to tune the drums.

The cords are first adjusted on a Geta Bera, and then a Dawula, he tries out various beats with his palms, his fingers, and the kadippuwa – a drumstick – the sound is like the heartbeat of Lanka, racing and slowing and then racing again, unbroken… 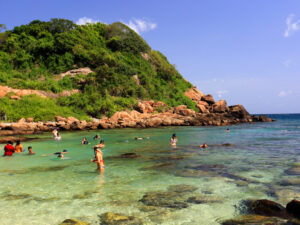 Next post Sri Lanka – Where to start?? | Sigiriya to Trincomalee